Today’s the mid-term election in America. Damn near every post on my Facebook feed is the same digital sticker saying “I voted.” that is otherwise completely devoid of content. For everyone who is proud of themselves for participating, I say, “Good for you!”  I, for one, will be abstaining.

Why?  Because of 3 reasons:

The first is logistical: I can’t get to the polling place.  When we moved to the Chicagoland area, we moved in to my brother-in-law’s house in Romeoville (a town that’s an hour away from where we live now). That’s where my ID says I still live, and hence is where I’m registered to vote.  Yes. I know that I need to get that ID updated. Adam and I have delayed that process because we thought we were going to be getting a house somewhere, and that it would be a lot of unnecessary waiting in line and filling out of paperwork. We expected to live in this apartment for maybe a year.  It’s been almost 3 now. So, we will be remedying that soon. Strictly logistically speaking, thanks to my seizure disorder, I lack the ability to drive way the fuck out there while Adam is at work. So, there’s no way for me to voice my opinion, if I even had one.

The second is practical.  I am not remotely invested in this community, and I am not educated on any of the races. Other than not wanting Bruce Rauner to be governor because his family gave $700,000 to the lobbying groups behind the terribly flawed SCOTUS Hobby Lobby decision, I have absolutely no opinion whatsoever on anything that’s being voted on.

Honestly, I am just starting to accept that Chicago is going to be my permanent home, and that I don’t have any say in the matter. I absolutely hated this city before being forced to make the best of being here.   I wanted to live in Los Angeles.  I still do, but I know it will never happen again. I did all the hard work necessary to get out there… but disability completely stripped me of my autonomy. I couldn’t support myself anymore, and when Adam couldn’t get a job there for over 2 years, we had to choose between going to a homeless shelter or moving in with family. Not a tough choice, especially considering that Adam had a job here within a week of our arrival — but it has been a long, difficult adjustment for me.  These days, I look hard to see what’s good about Chicago… (and there’s a lot!) but I still don’t feel like a Chicagoan. I don’t know if I ever will. I feel like the people who live here and love this place should have a louder voice than me when it comes to their local politics.

The third reason is intellectual honesty. I factually know that my vote wouldn’t matter anyway. I would only be playing my part in a nation-wide charade. We are no longer living in a representative democracy. We are living in a society where the only people who make it to the ballot are there because they have the financial support of oligarchs. We are living in a society where votes are lost all the time by malfunctioning hardware, where the Republican party actively works to stop poor people from voting and miraculously has the SCOTUS’s aid in doing so, where the only real votes we have are with our dollars.  You know, because money is speech now. Voting gives us the ability to PRETEND that we have any say in what goes on here. It gives us the ability to PRETEND that we’re not succumbing to neo-feudalism. This pageant gets played out because people buy in to partisan marketing messages and can’t be convinced of truth afterward.  I have had to accept that very, very rich people are the only ones whose voices will actually be heard by our government, and that those people, by and large lack empathy and are out of touch with the needs of the common person.

Personally, I don’t like participating in a farce, even if it’s the “American” thing to do.

Remember how I said we had a contract on a house? (This would be the 7th house we bid on in the last 6 months…)  Well, we don’t anymore. We had a housing inspector out on Saturday and found out that the property we were slated to buy had all sorts of interesting problems.

Electrical issues! There was no electricity to the kitchen, wiring to the main breaker using wires that aren’t even available in this country, and all of the electricity to the garage was not grounded, and was therefore a fire hazard. Also, the connection to the city’s power was not up to code, and there were wires just randomly sticking out of the ground that could hurt people!

Plumbing issues! All of the spigots on the outside of the house were leaky. None of the showers or tubs drain properly. The sump pumps were both homemade, rigged incorrectly, and non-functional. The whirlpool tub was non-functional. The hot water heater needed to be replaced.

Safety issues!  The door to the basement opened over the stairs. The outside stairs, both in the front and back were irregular in size and could cause people to fall. There were cracks in the foundation.

For these reasons and more, we decided to step away from the property.  At this point, I’m completely over the idea of owning a house. Other than wanting to be closer to family and friends, I don’t see a benefit. Our 2 bed/2 bath apartment has good access to public transportation and damn near everything you could want in walking distance, for a good price.  If Adam finds a place he wants me to check out, I’ll give it a look, but I’m absolutely done spending time on Zillow and RedFin for the time being.

It’s been over a week now since I last worshiped at the porcelain altar! Morning sickness has been replaced with extreme crankiness and bacne.

Tomorrow, we enter week 14. The traditional “size” this week is “lemon.”  I much preferred this graphic, however. 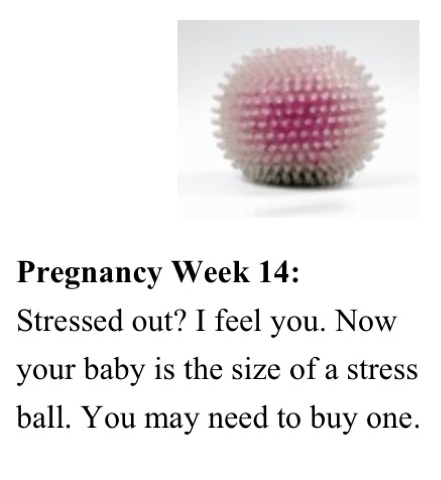 Our next OB appointment isn’t for another 2 weeks, so there really isn’t much to report. Things are just rockin’ along.  I have, however, come to a very important conclusion – and that is that I don’t need to participate in The Bump’s May 2015 mommy board anymore.

Why I left TheBump: Somebody asked about whether or not it’s ok to host your own baby shower, and she got mercilessly flamed. She was told, “If no one throws one for you, you don’t get one.” I jumped in to say that I vehemently disagree, and that Emily Post and Dear Abby’s opinions should never mean more than your personal experience and your genuine relationships with the people in your life. I said that folks are going to be giving their unkind, unwanted opinions regarding motherhood for the rest of time, so she should start getting in good practice on telling people where they can shove those unwanted opinions, and that she should do whatever makes her happy. At that point, I became the target for the catty, hormonal bitches, and decided that if I actually stood by my opinion, the correct next move was to completely ignore theirs.

I have found it interesting, however, that when I’m super cranky, I have an unreasonable desire to click back on that thread and see the mean things that these women have said and get upset and fight.  Resisting that urge has been a big deal for me.

And now, it’s time for me to go do all the things! You know, things like actually eating breakfast… 🙂